What's on your mind?

So after I finished the main theme I have no idea what to do after. The red disks that are used to unlock intermezzi and side stories are all used up and I'm just waiting for it to be recharged. The Contingency contract is only the training ground ones that bores me because it is getting repetitive for a while now. I am currently playing in a CN server since there are more things to do. What should I do in my global server account? any suggestions? I really have no idea :)) Thanks.

Recently I've found that I've been struggling to take down large, tanky enemies since I lack a good source of Arts damage aside from Amiya in my main party. With my main group being Amiya, Blaze, Thorns, Lappland, Reed, Nearl, Cuora, Shining, Ptiloptis, Myrtle, Schwarz and Platinum. With Blaze and Schwarz being my main way of bypassing Defense whenever Amiya is busy (or is waiting to be redeployed, due to that nasty caveat of her S3). Ive been messing around with Dusk and Eyja in the Support op slot, but obviously I can't pull any of those any time soon realistically. Who would a good fill-in caster be, who should I swap them for, and when would I feasibly be able to get them, if you have any advice for any of these?

Just out of curiosity, when do you guys think there will be a Thorns rerun?

I'm aware Thorns is on the Joint Operation banner right now but I just got Suzuran with my last roll so of course I'm not getting Thorns anytime.

I saw that Thorns' CN rerun was August-September-ish, so would it be safe to assume that the rerun would be 5-6 months from that date, which would be in January-February?

Just asking so I can start saving right away. Thorns is after all, my dream operator and I am doing my best to cope without him T-T.

Now you might be thinking I'm asking a stupid question and that I shouldn't have rolled on Joint Operation for Thorns if his rerun is so soon.

Well, to be fair I didn't have any of the rate-up ops on the Joint Operation and since they would all make perfect additions to my team I just decided "why not"? And I have used my brain to calculate that I can, indeed, save up enough for the banner. And Suzuran is indeed a good operator, and she's not leaving my team. ever. point made, no arguments.

Been using her a lot as a support unit because her S2 is just deleting everything that I point it at, and I wish I had her as a regular operator so I could use her in an auto clear. Obviously she's a crossover unit which leads me to my question; will there be another chance to pull her? If so I plan to save up all my Orundum and Permits for her, but if not then I'll probably spend them on the next time Dusk or Exu rolls around.

Recently new player here (started late October this year so it's been only a little over a month). I just got Ch'en and I was wondering if she's worth investing late-game? She's one of the only two 6-stars I have (+Siege) so I'd take the chance, but am a bit hesitant because I'm picky when it comes to spending resources.

I would post this in the Arknights Reddit or Discord but I just wanted to ask here first because I don't like using those two platforms as I've had... traumatic experiences there in the past. Sorry about that ⌒_⌒;

Pros and cons of Ch'en? Personal opinions always welcome. I'm aware she needs mastery on her skills to reach a lot of potential and that people say she's niche or falls off in late game/is powercrept by a handful of ops like Surtr (not sure if I should agree or disagree because I've seen plenty of videos of her nuking bosses, but then again, that's only with high investment ¯\_(ツ)_/¯). Which ops would work with her? (I've seen a lot of people using Warfarin or Aak, but I don't have either .-.)

I'm not going to entirely say "yes" or "no" to leveling Ch'en based on the opinions here, it's purely for me to gather information on what I need to be wary of when leveling her. Just so that I don't participate in a piñata party and start swinging my stick around with a blindfold before questioning what I was thinking. And it's also been a few months since I had an honest discussion anywhere online and I think I'm forgetting all the ways to say "hello".

Thanks in advance :D

Can anyone it and create a trivia for it? Also, here is some info I got from the PV.

And this CC is based on Who is Real, as seen here:

Also, Aak got a new skin!

(Note the words on the right side)

I guess that’s it.

Oh yeah, if you ever wonder what is ‘Pine Soot’ (aka. 松烟), it is a type of Chinese Ink (aka. 松烟墨), made from burnt pine wood.

Oh By the way, Mansfield Break is gonna rerun:

and Robin got a new skin:

Code of Brawl is getting a Record Restore (aka. rerun?)

And this is really it.

Is this event newbie friendly or veteran content? (as in difficulty)

As title says, I've been wondering if its worth it to even bother pulling on this banner. Having read the operators and seen a few people's opinions of the banner on YT, I'm almost inclined to pull on it, if not for a few things:

A; I already have Thorns, and while increasing potential isn't something I'll shy away from, I often see him as the big reason to pull.

B: Not really interested in the AOE medic either since I have Ptiloptis (but again, if I get her then I won't complain)

It's the other 2 that I'm considering, Weedy and Suzuran. I've been looking at support operators ever since my last post a little while back, and a pusher might be a fun addition to the party. Thoughts? (Pic in comments of my current team)

Just read the ones in Blemishine. Clumping them together will make it very hard to read.

Currently, we need additional people to help expand many of the stub pages as I want to focus more on the CN content and also some grammar fix. Here are the following pages that direly need expansion:

Doing this by myself alone will take too much time for me, so it would be better to call you all help expand them.

I have rather been quite a bit confuse about it since I read the “Heart of surging flames” event. Like I hole 0-8 episodes takes place in the span of 2-3 weeks. So when does that event take place, it couldn’t have been between that, since their vacation lasted a week or so?

And about “Darknights Memoir”, I know it takes place before chernobog attack, but how any years before? Like “A walk in the dust” was 22 years. And when exactly did Theresa died? Well I am actually confused about a lot of things…

Is there any tips to get what we want like i need Supporter Chip but keep getting vanguard chips :'( 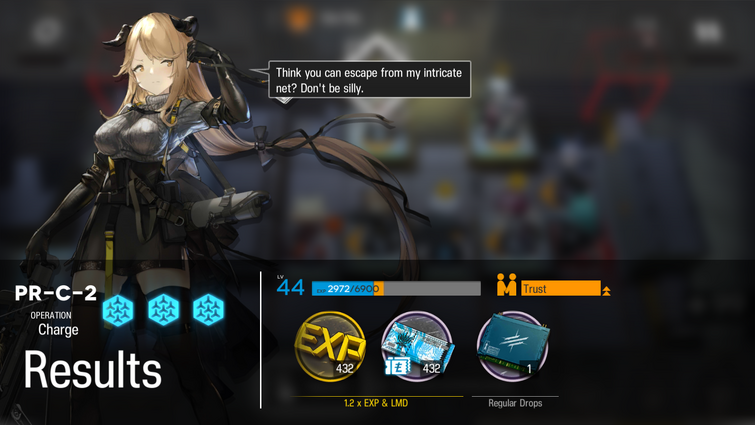 Right now I want to know what kind of op I should be looking towards next. I'm thinking either a better defender or a new Caster, but here's what Im rolling with rn:

Thorns, E2Lvl16, S3Lvl6: His S3 helps act as kinda an impromptu sniper of sorts so I use him like one.

Cliffheart, Almost E2(farming up money), S2Lvl7: The pull of S2 is super nice, IK Gladii's is better but IK how to use Cliff more, and she's a half-decent mini tank.

Cardigan, E1Lvl55, S1Lvl6ish: Despite being only a 3 star, her self-heal has definitely saved me a bunch. If I were to replace, I'd want another self-healer.

Cuora (Is that how its spelled? the 4-star defender with a baseball bat), E1Lvl60ish. Just booted Beagle in favor of this one, it seems basically like Beagle but with a better defender skill at the cost of just 2 more DP. Good trade.

Amiya, E2Lvl10, S2Lvl6: My main caster, and main form of arts damage (since Cliff does True damage and Blaze just does a butt-ton of damage). Considering getting a second spell caster, maybe AOE?

Shwarz, E1Lvl80, S2Lvl7. Picked her up and haven't put her down, the damage is just too good.

Platinum, E1,Lvl50ish, S2Lvl5. Combined with Shwarz nothing really gets by the two of them, Plat takes the skies and Shwarz takes the tank stuff. Double-so if I combine it with Blaze.

Reed, E1 Level 10 , S2Lvl45. Yes, I need to get Reed leveled up, but DP-per-kill vanguard has made me believe in vanguards (because beforehand Id just try to get Cliff and Myrtle to do damage tanking).

Ptiloptis (Is that how you spell it?), E1Lvl50ish, S2Lvl4. AOE Healer that saves my butt with the S2 every time. Usually smack in the middle of my defense line.

Shining, Ready for E2 except for money, S1+2 lvl 5 (I swap between the skills a lot). Wherever Blaze or Thorns are, Shining is as well. Pocket healer.

So yeah. Blaze, Thorns, Cliffheart, Cardigan, Cuora, Myrtle, Reed, Shwarz, Platinum, Ptiloptis, Shining and Amiya. Looking to try and get some more arts damage. or a better shield to replace Cardigan or Cuora. Any advice?

New player here, sorry if my english is bad

The dialogues at the beginning of the missions aren't appearing for me, like they are there so I have to touch the screen to pass them, but it doesn't show

I think it might be my phone. Has anyone had(s) this problem?

Hello to members of the wiki,

I would like to document versions of the Arknights UI work such that someone interested in seeing how the game used to look previously is able to see so in the wiki. For that purpose, I hope those of you who still have old screenshots would be able to document previous versions of the UI.

Currently, I am prioritizing event lobbies: that is to say the lobby the way it looks during the event's run and not after it is available in the Intermezzi/Side Stories menu. For example, the lobby of the currently running event, A Walk in the Dust: 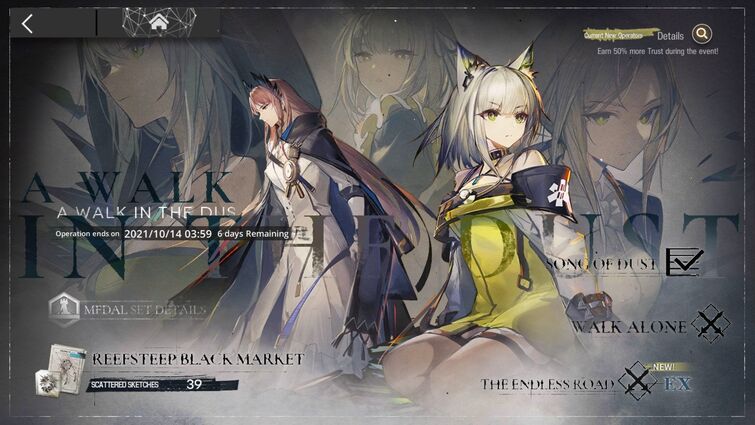 I will be looking through my own screenshots, but as I have several thousands over months, and they are all disorganized, it will take some time. I may also be missing some, so helping in the effort to archive these documents before they are lost would be very welcome.

I think rerun/initial run is fine, as long as we have the UI. Preferably, I would like EX stages to not be locked (the screenshot being taken when the EX stages are available).

The screenshots need to not have extraneous elements (such as your emulator's mouse cursor) and be in fairly decent quality: video recording frames are fine, if they have not been heavily compressed, for that reason, avoid YouTube video frames.

If and when we find all the events' UI, I would like to move on to other parts of the UI. As such, if you can provide examples of all the UI in the game as it currently is, or as it was in the past (such as event shop UI prior to their standaridzation with Children of Ursus/Twilight of Wolumonde), it would be helpful, such that, if it gets changed in the future, we will have archived its previous versions.

So according to the EXECUITIONER class description, operators have 18 redeployment time,

But THRM-EX has 200 redeployment time,

So is there a mistake in THRM-EX description?

Can someone remove the 'spoiler' in the NPC place? I didn't unlock the full story :P