Arknights: Endfield is an upcoming real-time 3D RPG and a spin-off entry in the Arknights franchise that is currently in development by Hypergryph. While the game inherits the worldview of Arknights, it has its own storylines and distinct characters. It is set to be released worldwide on PC and Android/iOS.

The story of Arknights: Endfield is a space opera-themed adventure that takes place on a new planet called Talos-II, a dangerous world rife with Catastrophes and risks. The planet's expansive wildlands and uninhabited areas stretched far beyond the colonies of the Habitable Band have yet to be discovered. Players will explore this untamed world with a team of Endfield Industries operators to unravel the mystery hidden within the abandoned ruins.

The game will have all-new gameplay mechanics and contents, which allows the players to control a party of selected operators as they explore Talos-II, complete missions, unlock new story chapters, and take on engaging challenges. As for combat, there will be a real-time strategic system, where the player can operate multiple operators simultaneously, and as the story progresses, the player’s party will encounter various factions and enemies that will offer an epic experience with varying tactics.[1]

Welcome to Talos-II, a dangerous planet rife with catastrophes and risks. The first pioneers toiled for years to establish a foothold. Settlements and nomadic cities sheltered by massive walls formed a new foundation for our civilization. But the vast wildlands and uninhabited territories stretching far beyond the colonies of the Habitable Band have yet to be surveyed. As such, most of this world remain untamed.

Expansion and exploration are unchanging themes that go hand-in-hand with progress.

Originium engines rumble in the wildlands while automated construction machinery work around the clock to deploy new industry complex production lines. You will lead a professional team of Endfield Industries operators. Explore this world, conquer this land, recover lost technologies, and unearth secrets hidden within the abandoned ruins.

Welcome to Talos-II and your new home at Endfield Industries. A new era of change has dawned upon this ancient world. Time to make your choice. 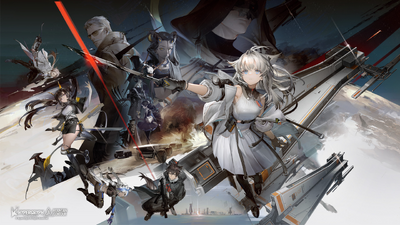 The Corruption is a dangerous supernatural catastrophe that occurs on Talos-II. Affected areas will exhibit various environmental distortions and anomalous physical phenomena.

Artificial structures and abandoned factories are the most common ruins from the Old Era of Talos-II.

The pioneers of Talos-II hailed from different nations and factions. Shifting allegiances and hostilities are a common sight in this world.

Endfield Industries Company is a renowned high tech contractor on Talos-II and an active contributor to planetary development projects.

A key objective of Endfield Industries is to establish self-sufficient power and technology production lines in the barrens.

Unknown mysteries and threats fill the wildlands beyond the Habitable Band. These include the inorganic swarming constructs known as the Aggelos.

Welcome to Talos-II. Lead your team. Make your choice.

Community content is available under CC-BY-SA unless otherwise noted.
Advertisement